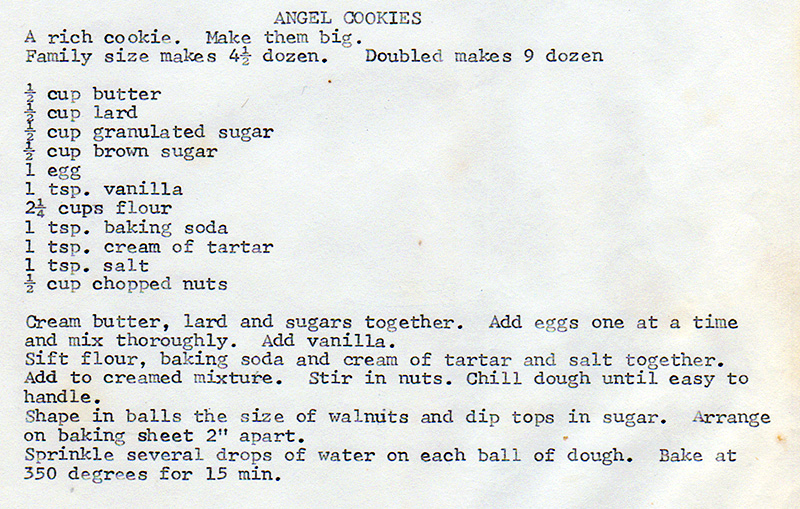 If you can’t find lard, of course, you can use vegetable shortening, and sometimes you can use butter. (More on that to come.)

Technically speaking, lard is a form of shortening, which is a word used to describe fats that are solid at room temperature. These fats can be used to achieve many different textures of baked goods, but particularly excel at “short doughs,” which is to say, doughs intended to achieve a crumbly texture, as opposed to “long doughs,” like a flaky pie crust.

The root concept of “short doughs” that gave shortening its name is also the concept that named shortbread; that crumbly texture. So if butter works to make shortbread, and it works to make angel cookies, here, why is butter only sometimes an acceptable substitute for lard or shortening?

Shortening is supposed to be 100% fat. In the U.S., butter is 80% fat. Water and milk solids make up the remaining volume. Whether butter will substitute for shortening in a given recipe has a lot to do with what is going on in the recipe and whether the recipe could accomodate the different volume. But if you substitute butter for lard in a recipe and it doesn’t work, try again using 1/5th more butter than the amount of lard, which would give you a 1:1 ratio in replacing the missing fats.

Here’s a variation from the Dec. 20, 1958 edition of The Washington Observer which uses candied cherries and flaked coconut. It also omits the lard and doubles the butter.

Cream butter, lard and sugars together. Add eggs one at a time and mix thoroughly. Add vanilla.

Sift flour, baking soda and cream of tartar and salt together. Add to creamed mixture. Stir in nuts. Chill dough until easy to handle.

Shape in balls the size of walnuts and dip tops in sugar. Arrange on baking sheet 2″ apart.

Sprinkle several drops of water on each ball of dough. Bake at 350 degrees for 15 minutes.

Yesterdish suggestion: After shaping in balls, dip half the balls in water and then roll in granulated sugar, rather than rolling in sugar and then adding drops of water.