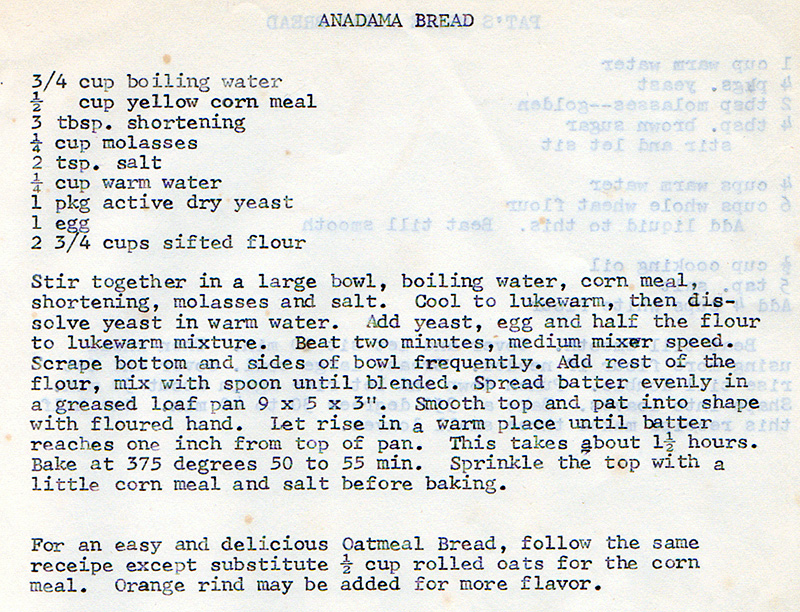 An early 19th century recipe from New England. Printed versions show up after the start of the 20th century, but as supposedly, anadama bread was being made in Rockport, Massachusetts for 50 years prior.

The legend surrounding the mysterious name is reprinted in the June 25, 1968 edition of the Merced Sun-Star, titled “Lazy Wife Was Real Cause of Anadama Bread.” As the name suggests, the legend is that a Gloucester fisherman was forced to cook for himself, and in frustration added yeast and flour to a molasses and cornmeal porridge, then muttered “Anna, damn her” over and over while waiting for it to bake.

Hrumph. I wonder if we shouldn’t call this Makeyerowndamnfoodyoulazyjerk Loaf. Doesn’t roll off the tongue, but I feel a lot better about it.

Add rest of the flour; mix with spoon until blended. Spread batter evenly in a greased loaf pan 9x5x3″. Smooth top and pat into shape with floured hand. Let rise in a warm place until batter reaches on inch from top of pan. This takes about 1-1/2 hours.

Bake at 375 degrees 50 to 55 minutes. Sprinkle the top with a little cornmeal and salt before baking.

For an easy and delicious oatmeal bread follow the same recipe except substitute 1/2 cup rolled oats for the cornmeal. Orange rind may be added for more flavor.