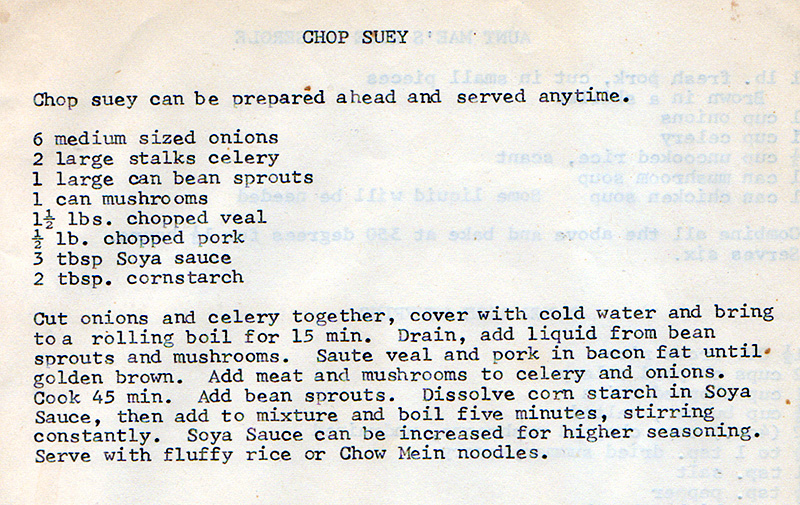 Supposedly, “shap sui” is a transliteration of Cantonese meaning something like “mixed pieces.” At some point between the late 1880s and early 1900s, American-Chinese chefs started using this term to apply to a mixture of diced meat and vegetables in a starch-thickened sauce. By the 1940s it was immensely popular, and it remained so until the late 1960s or early 1970s, when a misplaced lust for “authenticity” (whatever that is) pushed it off many menus.

Some modern sources have stated that Toisan, south of Canton, does indeed have a “shap sui” dish, where leftover vegetables were mixed together with meat and sauce. As many early Chinese immigrants to California were from Toisan, it’s entirely possible that chop suey was an import.

If what we’re fighting over is the dish, then I’d argue the dish was probably made for centuries by different people in different places using whatever vegetable and proteins they had. If what we’re arguing about is the name, then let’s share credit (the Cantonese for writing it and the Americans for mishearing it) and stop worrying about it.

And in general, as I’ve said before, you should accept cultural authenticity as a guidepost but utterly reject it as a prison. The only authenticity that matters is personal authenticity. (For example, if you grow up next to a Jewish deli in an Italian neighborhood, then a corned beef focaccia sandwich is authentic.)

Chop suey can be prepared ahead and served anytime.

Cut onions and celery together, cover with cold water and bring to a rolling boil for 15 minutes. Drain, add liquid from bean sprouts and mushrooms. Saute veal and pork in bacon fat until golden brown.

Add meat and mushrooms to celery and onions. Cook 45 minutes.

Yesterdish suggestion: If you use fresh bean sprouts, please cook them for at least 30 seconds before taking the dish off the fire. Bacteria love bean sprouts.