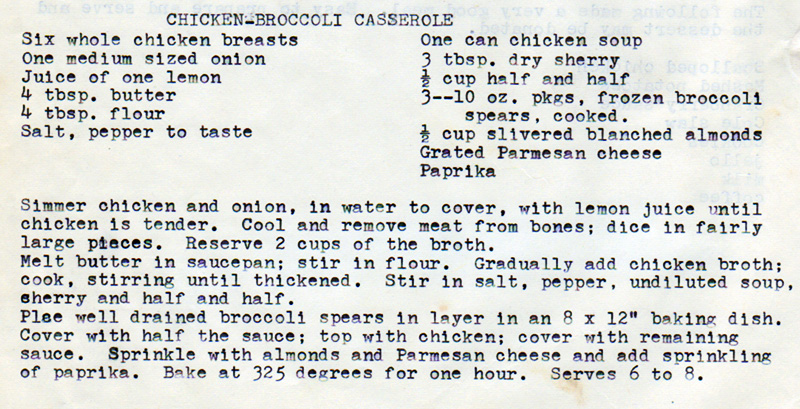 Broccoli wasn’t commercially harvested in the U.S. until the late 1920s. Incorporating it into the American diet took a bit longer. Consider this Carl Rose cartoon from the Dec. 8, 1928 edition of The New Yorker: By the 1940s, most Americans could identify broccoli, so that hurdle was cleared. But being able to identify a vegetable and being able to prepare it correctly are two dramatically different things. Broccoli, which was known to the Romans, was frequently mistreated by those preparing it, who failed to peel the stems, then split the stems and pull the florets apart. The result was (and is, sadly, still all too often) a vegetable with an indigestible layer of outer fiber left attached and florets mashed beyond recognition by a chopping knife.

These days, we’d understand an education campaign was necessary to correct these problems. Sadly, most broccoli advertising during the last century, to the extent there was any, often did not take that form.

Simmer chicken and onion in water to cover, with lemon juice, until chicken is tender. Cool and remove meat from bones; dice in fairly large pieces. Reserve 2 cups of the broth.

Melt butter in saucepan; stir in flour. Gradually add chicken broth; cook, stirring until thickened. Stir in salt, pepper, undiluted soup, sherry and half and half.

Place well-drained broccoli spears in layer in an 8×12″ baking dish. Cover with half the sauce; top with chicken; cover with remaining sauce. Sprinkle with almonds and Parmesan cheese and add sprinkling of paprika. Bake at 325 degrees for one hour. Serves 6 to 8.