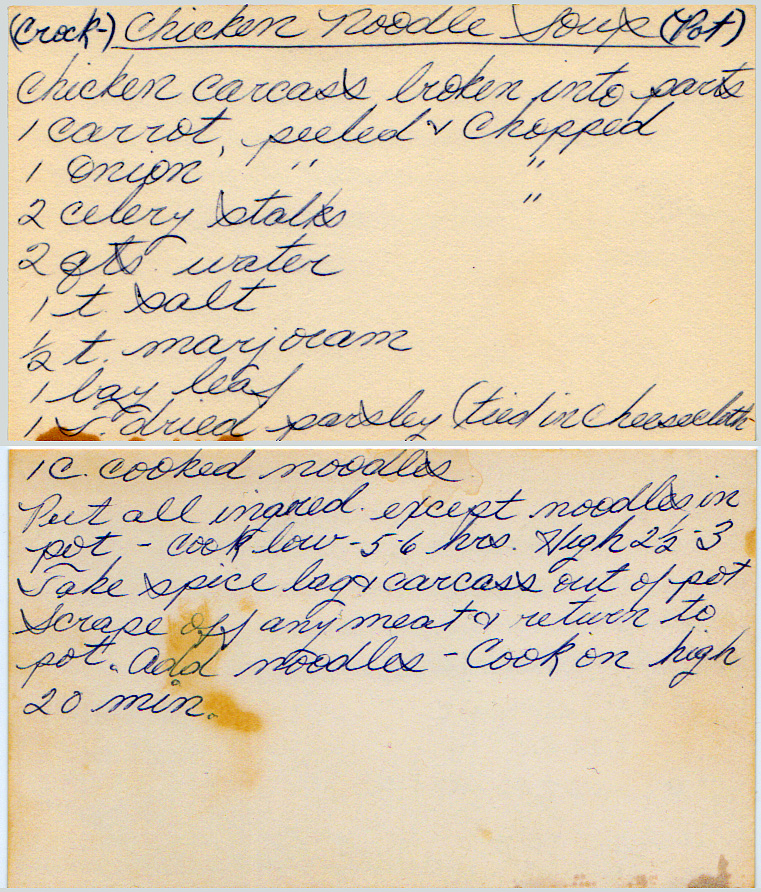 Remember what I said about the last soup from this box? Soup starts with stock, not water.

Also, don’t put dried parsley in anything. Ever. It has the same number of culinary applications as a box of wood screws. This isn’t about being a snob, it’s about dry parsley tasting more like old newspaper than parsley. I love parsley. Dried parsley tastes nothing like parsley. And I think some dried herbs are great: I use dried oregano, thyme, even rosemary and chives for some applications. But dried parsley is terrible and tastes like nothing.

A useful thing to know, however, is that parsley stems carry the flavor of parsley, so you can save the leaves for finishing the soup and just take the stems, wash them, cut off the ends, and tie them in a knot, then throw them in the pot.

I understand why the card suggests pre-cooking the noodles, since they’re prone to absorbing so much soup you end up with a pot of pasta. But my general feeling has been that, if I need more stock to reconstitute the soup, I’ll add more stock.

Put all ingredients except noodles in pot. Cook low, 5-6 hours, high 2 1/2-3. Take spice bag and carcass out of pot. Scrape off any meat and return to pot. Add noodles–cook on high 20 minutes.

Yesterdish suggestion: Don’t ever use dried parsley for anything, ever, at all. Life is too short.