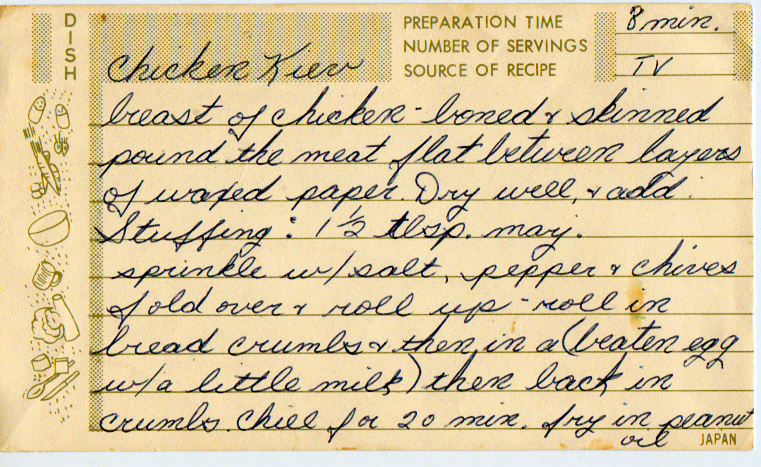 The origin of this recipe is complicated, but its cultural significance is clear.

For a country that didn’t have a sense of personal property, Soviet Russia was all too happy to claim credit for all manner of things it had little or nothing to do with. The running Star Trek gag of Chekov claiming things as Russian came from somewhere, after all.

Chicken Kiev really isn’t any different. Jassy Davis wrote a fantastic and comprehensive writeup here, but here’s the short version: a French chef in the early 19th century (Nicolas François Appert, actually, the inventor of canning) made the dish for Napoleon and called it suprême de poulet, or chicken supreme. Russian nobles, who had a fascination with copying French culture, appropriate the recipe and called it the less exciting côtelettes de volaille, or poultry cutlet. (But, you know, in French, so it’s fancier.)

Anyhow, at some point, restaurant owners in New York started calling it Chicken Kiev and variations thereof to attract Russian immigrants. While all of that is interesting, it doesn’t really articulate the cultural significance of Chicken Kiev. Between the late 1940s and the mid-1970s, Chicken Kiev had a perfect pedigree for achieving success as a high-class food; it sounded a little exotic and tasted fairly bland. It looked on a menu like you were serving haute cuisine, and yet nobody in the history of time has ever refused a plate of butter-stuffed fried chicken because they didn’t like the taste. In the 1960s, New York restaurants like Jimmy’s La Grange and the Russian Tea Room became known for the dish.

Since the mid-1970s, Chicken Kiev really hasn’t had a moment where it could return to the spotlight. Its fortunes diverged long before it realized why; French though it was, it had a Russian (well, Ukrainian, really) name. So while it rode high in the 1960s, by the 1970s, the obsession with European cooking actually did more to popularize the cousin that it inspired, chicken cordon bleu, than it did chicken kiev.

Then, as it started to be “democratized,” which is to say, popular in preparations accessible to the masses, it stopped being haute cuisine. In the U.K., Marks & Spencer made Chicken Kiev their first take-home prepared meal in 1979.

So I guess what I’m trying to say is that the time might be right to return Chicken Kiev to the table.

Breast of chicken — boned and skinned

Fold over and roll up; roll in bread crumbs and then in a (beaten egg with a little milk) then back in crumbs. Chill for 20 minutes. Fry in peanut oil

Yesterdish suggestion: Although not technically a requirement of the original recipe, garlic is traditional in the butter mixture in most preparations. And I enjoy a bit of tarragon, but your results may vary on that.