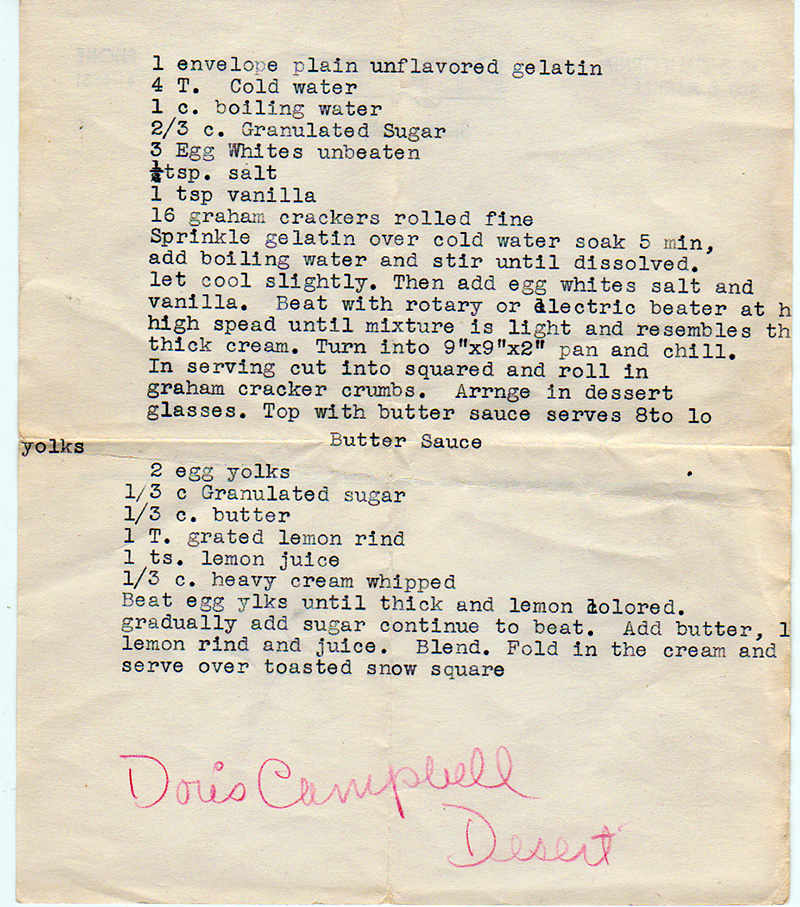 Nothing like a recipe with no title and a first ingredient of unflavored gelatin.

Recipes for “toasted snow squares” started showing up in women’s auxiliary cookbooks in the 1950s. By 1961, it popped up in newspapers as the more geometrically appropriate “toasted snow cubes.” And it ticks all the boxes for a classic 1960s dessert. Gelatin? Check. Butter sauce? Check. Somehow managing to take store-bought shelf products (like graham crackers) and make them just as much work as starting from scratch? Double-check!

I’m not kidding about that last bit, actually. In the Mad Men era, it was considered a sign of affluence to use store-bought products. At the same time, it was still considered a sign of being a good housewife and hostess to put effort into the dish you present. The net result was a cultural evolution into finding things that were already fully prepared foods and then use some kind of S&M culinary technique to force them into more highly prepared foods.

To the extent we think of so much of 1960s food as awful, this is substantially why, because as a general matter, cooking food twice doesn’t improve it. (Or to put it another way, taking sub-par store-bought foods and cooking them even further actually makes things worse than the original ingredients. Witness the entire career of Sandra Lee.)

For the record, the primary ingredients of graham crackers are whole wheat flour, all purpose flour, sugar, honey, cinnamon, baking soda and vanilla. There’s no particular reason why these things need to be baked into crackers before they’re turned into crusts. You could bind them with a little oil before cutting butter and sugar into them. I’m not saying I don’t like graham cracker crusts, because I do; I’m just asking, have you really given any thought to why we do this?

I’ll see if I can dig up when graham cracker crusts were invented, but I’d guess somewhere between the late 1940s and early 1950s. I know the Key Lime Pie, invented in the 1930s, first used a standard pie crust, so I’m inclined to think they weren’t popularized before then. Anyhow, back to the recipe at hand…

The snow cubes themselves exist in a limbo somewhere between a marshmallow and a meringue in a way that avoids the difficult parts of either. Making marshmallows is primarily a pain because you’re working with molten sugar, and here, you aren’t. The annoying part of making meringue is achieving and stabilizing that foam; here, you don’t have to.

So who is Doris Campbell? I don’t know, but there was a Doris Campbell born about 60 miles away in Coos County in 1918. That’d put her in her early 40s around the time this recipe would’ve been served.

Beat with rotary or electric beater at high speed until mixture is light and resembles thick cream. Turn into 9″ x 9″ x 2″ pan and chill.

In serving, cut into squares and roll in graham cracker crumbs. Arrange in dessert glasses. Top with butter sauce. Serves 8 to 10.