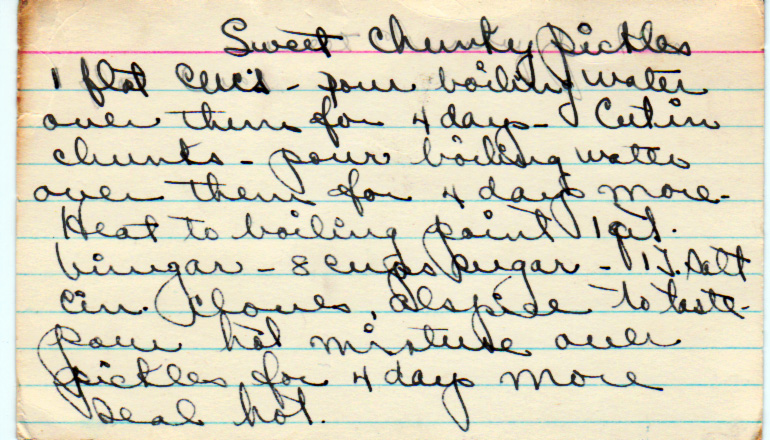 I know this will seem really strange, but this recipe isn’t crazy. It’s just using a bit of shorthand, which I’ll expand in the method notes below.

Apparently this method of processing sweet pickles ensures the pickles come out crisp. But I can’t find any source that agrees on the mechanism as to why the pickles come out crisp. Some people think it has something to do with enzymes that need to be killed off or they’ll squeeze water out of the pickle and shrivel it; others say it has something to do with the formation of lactic acid on the surface of the pickle that gives it a crispy texture.

I’ll keep looking into it. But what I do know is that this method actually… will work.

What the recipe is trying to tell you to do is this:

Wash the cucumbers and trim off the blossom end. Get a container (or containers) big enough to submerge the cucumbers in boiling water, and something to weigh them down with, like a temperature-safe plate or a bowl that fits into the container to make sure the entire cucumber is submerged.

Day 1: Cover the cucumbers in boiling water. Weigh them and submerge.

Days 2-4: Each day, pour off the water. Rinse the cucumbers, the container, and the weight. Add fresh boiling water and re-submerge the cucumbers, weighing them down again.

Day 5: Pour off the water. Rinse the cucumbers, the container, and the weight. Cut the cucumbers into chunks. Pour boiling water over them and weigh them again.

On day eight, them you submerge them in the brine and process them.

Frankly, you may be better served investigating the famous Linda Lou’s Sweet Pickle Chunk recipe from the GardenWeb forums. It’s pretty much The Beatles of sweet pickle chunk recipes. Take a look at it, anyhow, since it uses the “boiling water for days” method.