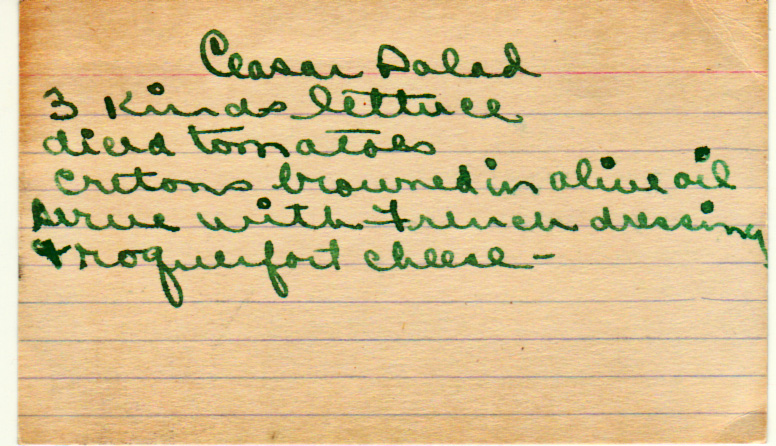 Well, the card says Caesar salad, but it’s not.

While books have been written on this topic, here’s the short version of how Caesar salad came to be. In the 1920s, an Italian immigrant named Caesar Cardini and his family operated two restaurants: one in San Diego, and one in Tijuana, Mexico. (Since it was prohibition, trips to Tijuana for a meal were even more common.) As the family tells the story, one day the restaurant was running low on ingredients, and Caesar improvised a salad that became popular with Californians seeking to taste a little liquor with their dinner.

Julia Child tells the story of going to Cardini’s Tijuana restaurant as a child with her parents and seeing Caesar prepare his salad. It was prepared tableside, with long, uncut leaves from the heart of a head of romaine. The dressing included garlic rubbed in the bowl, salt, pepper, Parmesan cheese, Worcestershire sauce, olive oil, coddled egg and mustard.

(And not anchovies. I like anchovies, mind you, but Caesar Cardini didn’t put them in the salad. His brother Alex, who claimed to have made something like the Caesar salad called Aviator’s salad, included anchovies in that recipe. But once you’ve put someone’s name on something, I think you lose the right to debate what should go into that recipe over that person’s objection.)

Just as important to the ingredients was the drama of the affair; witnessing the egg emulsify the dressing before your eyes, the sweeping motions of leaves being tossed, the sprinkling of the Parmesan, and ultimately being presented with a plate of large leaves you were meant to pick up by the end and eat as if a rib of celery, licking your fingers clean. The proper Caesar salad was, and is, the sexiest salad you can serve in mixed company.

The significance of the Caesar salad almost can’t be overstated. It’s possibly the best recipe created in the 20th century, certainly the most enduring and successful one. It also represents the importance of elegance and simplicity. Nothing added to the basic caesar salad improves it. It might add a new dimension; it might create a new dish with more protein; but is it better? Not really. Caesar salad is the highest expression of its constituent parts.

What any of this has to do with the salad on this card, I haven’t the foggiest idea. This might be a perfectly fine salad–though I’ve never said, “mmm, roquefort, I hope I can find a ketchup-based dressing to cover it in”–but it’s not a Caesar salad. It’s not even a cousin of a Caesar salad. This salad is as close to being crepes suzette as it is to being Caesar salad.

[Not] Caesar Salad [At All]

Yesterdish suggestion: For what it’s worth, noanchoviesincaesar.com has an excerpt of Julia Child’s thoughts on the salad and a proper recipe approved by Caesar Cardini.