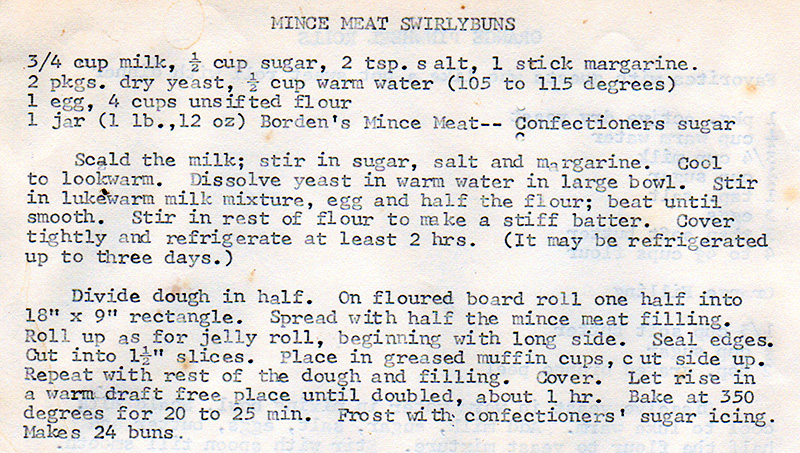 Mincemeat is a favorite of mine. Generally speaking, mincemeat is a combination of dried fruits, apples, spices, and usually some amount of beef or suet, though the amount in most modern preparations is somewhere between “nearly none” and “actually none.” (But see Mabel’s Mince Meat for a traditional version.)

The appeal is hard to explain if you’ve never tried it. Probably because there’s nothing quite like it; it’s incredibly sweet but has a strong umami quality to it. I promise you, it’s far more delicious than you think.

Borden’s None Such Mince Meat was exactly what it sounds like, a brand of store-bought mincemeat. The None Such brand of minecemeat was purchased by Borden in the late 1920s. Here’s an ad for it from the June 10, 1942 Spokane Daily Chronicle:

At some point, Borden sold the brand to Smuckers, and it’s still produced today under the None Such label. So go forth and find it in your local grocer (I know Giant and Target carry it).

Scald the milk; stir in sugar, salt and margarine. Cool to lukewarm. Dissolve yeast in warm water in large bowl. Stir in rest of flour to make a stiff batter. Cover tightly and refrigerate at least 2 hours. (It may be refrigerated up to three days.)

Divide dough in half. On floured board roll one half into 18″ x 9″ rectangle. Spread with half the mince meat filling. Roll up as for jelly roll, beginning with long side. Seal edges. Cut into 1 1/2″ slices. Place in greased muffin cups, cut side up. Repeat with the rest of the dough and filling. Cover. Let rise in a warm draft-free place until doubled, about 1 hour. Bake at 350 degrees for 20 to 25 minutes. Frost with confectioners sugar icing. Makes 24 buns.