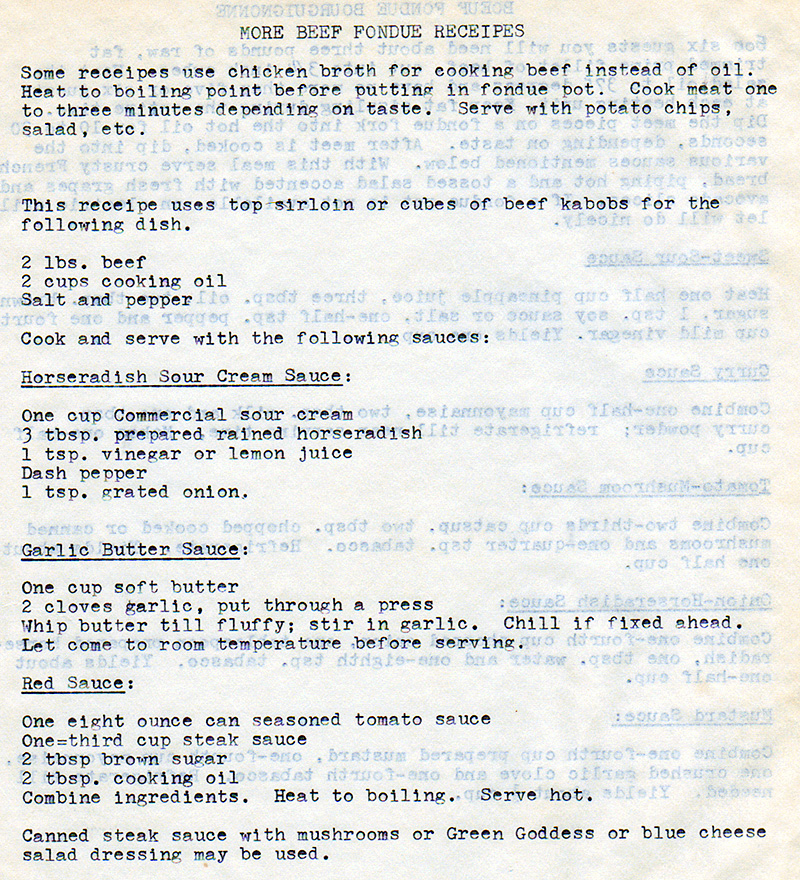 Dipping something in something to cook something is a recurring theme. The original beef recipes in this folder started here, with Boeuf Fondue Bourguignonne.

So we covered fondue bourguignonne, which is dipping meat in oil. And we know about cheese fondue, dipping bread and vegetables in cheese. Chocolate fondue warms the fruit it coats, if it doesn’t quite cook it. But the Swiss aren’t the only dippers. In Italy, bagna cauda has vegetables being dipped in an oil that’s been mixed with garlic, herbs and other seasonings to flavor them while lightly cooking them, and in Japanese cuisine, shabu-shabu cooks thin pieces of meat in dashi. So there’s something about this process that we keep recreating, which suggests to me there are recipes of this nature yet to discover.

Some recipes use chicken broth for cooking instead of oil. Heat to boiling point before putting in fondue pot. Cook meat one to three minutes depending on taste. Serve with potato chips, salad, etc.

This recipe uses top sirloin or cubes of beef kabobs for the following dish.

Cook and serve with the following sauces:

Chill if fixed ahead. Let come to room temperature before serving.

Canned steak sauce with mushrooms or Green Goddess or blue cheese salad dressing may be used.