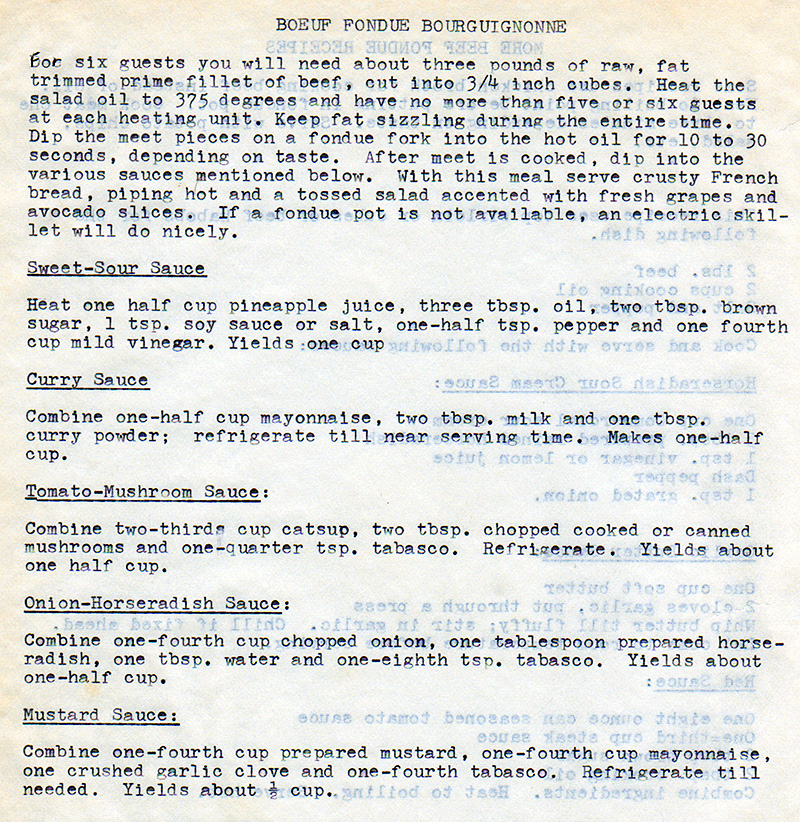 Sounds both Swiss and French, but it’s Swiss. In this context, Bourguignonne means “in the style of Burgundy,” which is one of France’s top regions for the production of beef (second to Normandy, actually).

France is the largest beef exporter in the EU. So why is the dish named after Burgundy, rather than top-producing Normandy, or the region considered to produce the highest-quality beef in France, Limousin? Because Burgundy is geographically closest to the southeastern parts of Switzerland where fondue bourguignonne was created.

So the boeuf in the name is basically extraneous, because all fondue bourguignonne is made with beef, since the regional reference is to the origin of the main ingredient. But the language is correct, since they do speak French in that part of Switzerland.

For six guests you will need about three pounds of raw, fat trimemd prime filet of beef, cut into 3/4 inch cubes. Heat the salad oil to 375 degrees and have no more than five or six guests at each heating unit. Keep fat sizzling during the entire time.

Dip the meat pieces on a fondue fork into the hot oil for 10 to 30 seconds, depending on taste. After meat is cooked, dip into the various sauces mentioned below. With this meal serve crusty French bread, iping hot and a tossed salad accented with frehs grapes and avocado slices. If a fondue pot is not available, an electric skillet will do nicely.