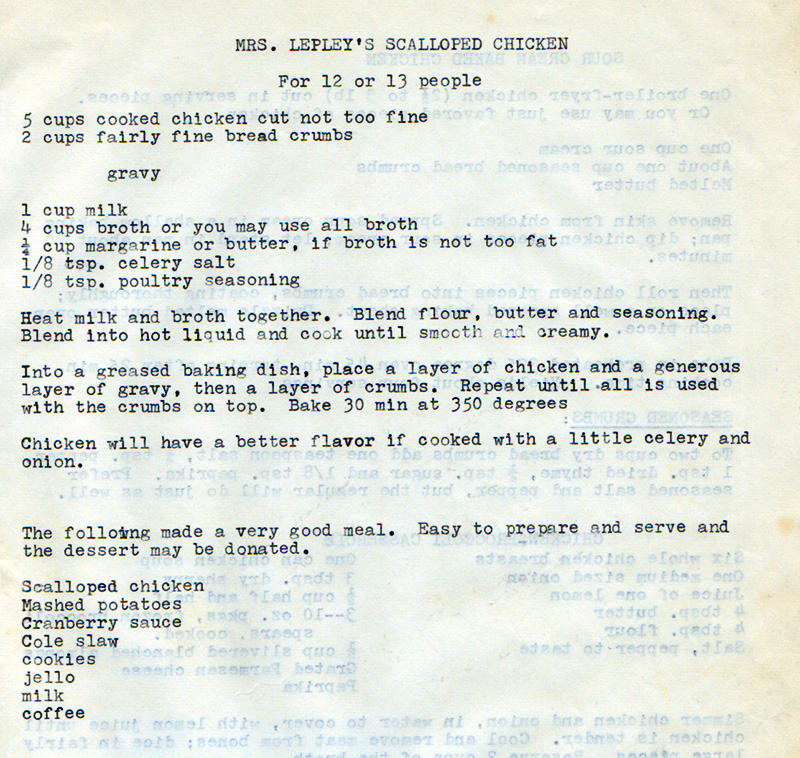 So what is a scallop of chicken? It’s a pounded-flat section of meat.

In the past, the culinary term for this was paillard, loaned to us from the French. The French have since moved on to calling these cuts escalopes. In the U.S., we call them medallions when we’re serving pork (because they’re generally cut from the loin or tenderloin and therefore round) and scallops when when we’re serving chicken or veal, because they’re generally not round enough to be medallions.

In some upscale restaurants, you might encounter any of the above terms, so be aware that paillard, escalope, medallion and scallop all refer to the same thing, a flattened piece of meat. (Curiously enough, the French rarely use the term paillard in a culinary context anymore, because it developed a secondary meaning that’s something like “bawdy.” Use your imagination as to how the figurative meaning of “meat pounded flat” overtook the literal meaning.)

Which is mostly an elaborate way for me to say that this recipe appears not to involve scallops of chicken at all, but is taking the term from “scalloped potatoes,” not realizing that the term refers to the method of cutting potatoes, while the proper term for the dish would be a gratin.

Heat milk and broth together. Blend flour, butter and seasoning. Blend into hot liquid and cook until smooth and creamy.

Into a greased baking dish, place a layer of chicken and a generous layer of gravy, then a layer of crumbs. Repeat until all is used with the crumbs on top. Bake 30 minutes at 350 degrees.

Chicken will have a better flavor if cooked with a little celery and onion.

The following made a very good meal. Easy to prepare and serve and the dessert may be donated.