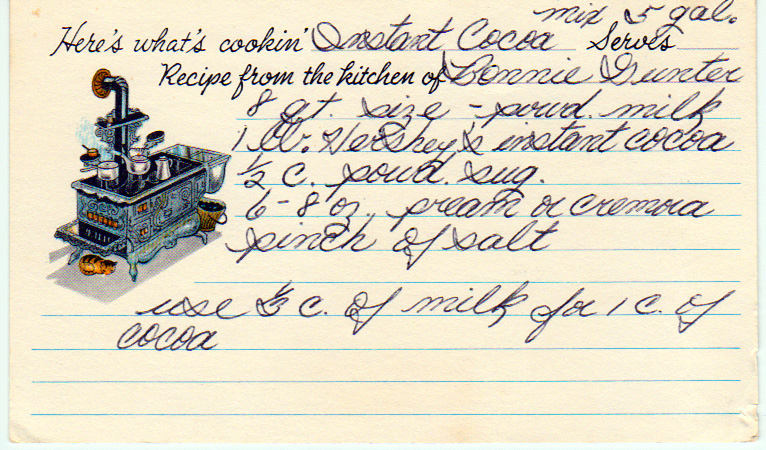 This is another recipe that calls for a product not on the market (I think). Hershey’s Instant Cocoa Mix was basically a powdered mixture of cocoa, sugar, and a vanilla flavoring agent (vanillin; I don’t know if it was organic or synthetic, though). Hypothetically speaking, adding milk to those ingredients alone would make hot cocoa.

Obviously, the owner of this box thought it needed some doctoring.

The Hershey’s style of instant cocoa mix (just add milk) has fallen somewhat out of favor due to the availability of Swiss Miss-style cocoa mixes (just add water), which take the ingredients of a Hershey’s-style mix and add powdered milk and whey. This mix attempted to do the same thing using powdered milk and non-dairy creamer. You can recreate this original mix to a point, assuming you’re willing to go obtain a powdered vanilla flavoring, but for the amount of effort that would take, you could far more easily scrape a vanilla bean at the time you wanted the cocoa. But if you find yourself feeling nostalgic, the option exists.

Instant Cocoa (as written on the card)