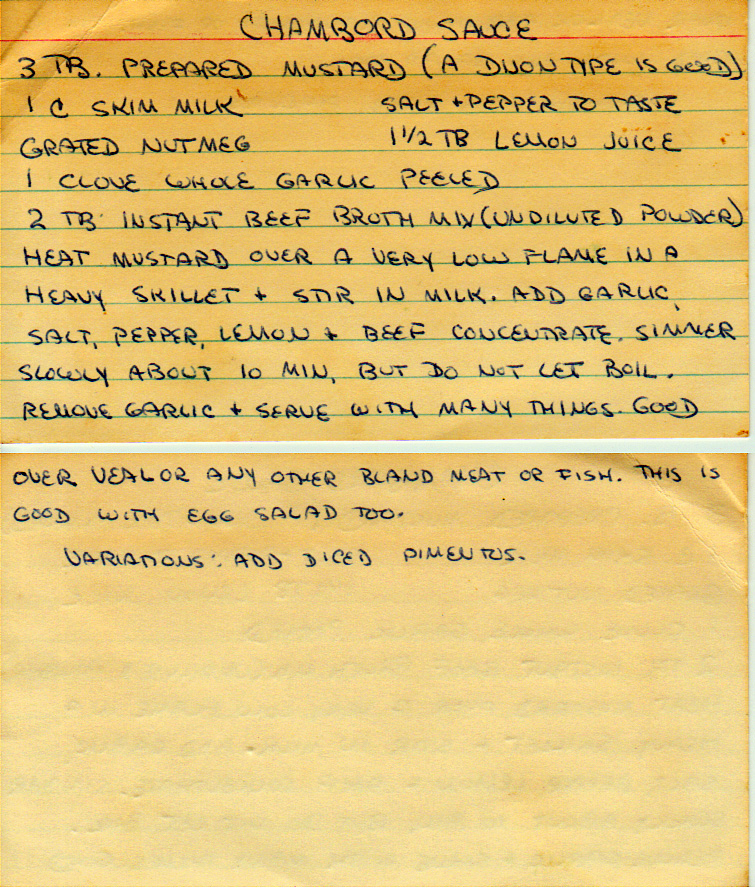 Okay, here’s the thing. Chambord is raspberry liqueur. While there are lots of sauces for meat (particularly gamey meats) that use Chambord in the sauce, those sauces, y’know, have something to do with Chambord.

So maybe it’s the name? No. Chambord is a commune (basically a village) in the Loir-et-Cher department, which is famous primarily for its chateaux. There is comparatively little agriculture there (you’d be surprised how few people who own giant castles want to live with farm animals). The primary agricultural product of Loir-et-Cher is goat cheese. Given that this sauce has neither goat nor cheese in it, nor would I generally suggest pouring beef-flavored sauces over goat meat, this doesn’t appear to be named regionally, either.

You occasionally people see use Chambord to refer to a color, but when they do, it’s a purple color, and this sauce will not be purple.

I’m not even sure what they’re trying to accomplish here, chemically. Mustard can emulsify things but there’s no fat here to emulsify into the liquid. A roux-thickened veloute could be finished with cream but there is no roux, the stock isn’t liquid and the milk is skim. There’s no structure to what’s happening here. This is basically mustard and beef flavored milk. What that has to do with Chambord I cannot begin to imagine and I refuse to process it. At all. Ever.

I have just introduced the tag “no.”